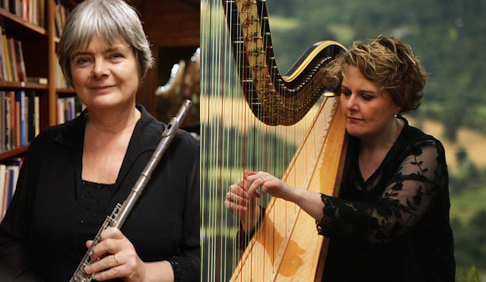 Programme will include the Alvor Ensemble recital of duos by Ibert, Faure, Godard and Haydn.

Sarah Newbold is a member of the Academy of St. Martin in-the-Fields and the New London Orchestra, and formerly of both Welsh National Opera and the London Philharmonic.As a freelance player she works with most of the orchestras in Great Britain and regularly with the Philharmonia and London Symphony Orchestra. She is able to work in a variety of musical styles ranging from opera, symphony and chamber orchestras, chamber music and recitals, to film sessions and period instrument work.

Teaching plays an important part in Sarah’s musical life and she has been a professor of flute at the Guildhall School of Music and Drama since 1989. In collaboration with Ian Clarke she redesigned the technical requirements for the woodwind at the Guildhall School, this has led to invitations to present workshops at the “Reflective Conservatoire” conference at the Barbican, London and also the “Professional Development” Seminar in Helsinki, Finland. Together with Zoe Smith, piano, she is director of the Llangenny Flute Summer School which is in its fourth highly successful year. Sarah is a regular coach for the National Youth Orchestra of Great Britain both for their open days and the main orchestra courses.

Sarah studied the flute with Atarah Ben Tovim and Alan Lockwood at Huddersfield Polytechnic and with Peter Lloyd at the Guildhall School of Music and Drama.  She completed her studies at the National Centre for Orchestral Studies.

Katherine Thomas is a harpist who has performed with artists varying from Bryn Terfel and Rolando Villazon to Katherine Jenkins and the Manic Street Preachers. She has toured extensively as a soloist and with orchestras, including the Orchestra of the Welsh National Opera (WNO) with whom she is Associate Principal Harp. A graduate of Guildhall School of Music & Drama, where she studied the harp with David Watkins, Katherine plays the traditional celtic and triple harps as well as the pedal harp.

Her recordings range from classical music, traditional Welsh music to contemporary recordings and she has featured on numerous broadcasts and recordings with WNO. Katherine has published several technical volumes for the harp (published by ALAW) and is a prolific arranger for the instrument.

She currently teaches the harp at Christ College Brecon.

FROM REQUESTS WE ARE NOW ABLE TO OFFER PRE-CONCERT SUPPERS DOWNSTAIRS AT THE CHAPEL KITCHEN. MENU FROM OUR BLACKBOARD. BOOKING IS ESSENTIAL AS SEATING IS LIMITED 01873 736430