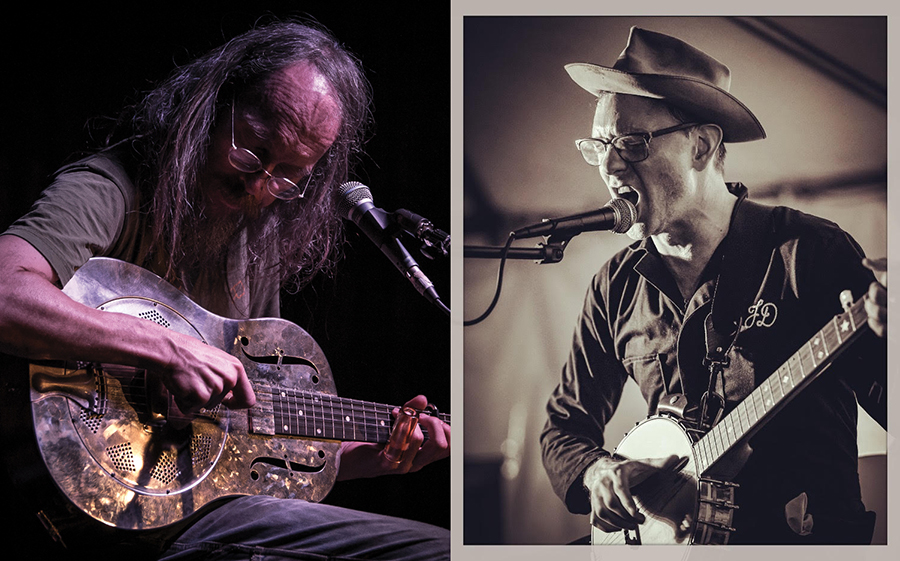 Just announced Charlie Parr and JD Wilkes on tour here in Britain, coming to perform at the Chapel. Book your tickets now for two separate performances in one evening.

Charlie Parr is an American country blues musician, born in Austin, Minnesota. An easily confused and very shy individual, Parr has been travelling around singing his songs ever since leaving Austin Minnesota in the 1980’s in search of Spider John Koerner, whom he found about 100 miles north at the Viking Bar one Sunday night. The experience changed his life. Spider John Koerner (born 1938 in New York) was an American guitarist, musical genius, singer and songwriter who inspired a  generation of musicians including Bob Dylan, John Lennon, Ray Davies, Bonny Raitt and the Doors.

JD Wilkes is an American musician, visual artist, author, filmmaker and self-proclaimed “southern surrealist”.  He is an accomplished multi-instrumentalist (notably on harmonica and banjo), having recorded with such artists as Merle Haggard, John Carter Cash, Mike Patton, and Hank Williams III. Wilkes’ latest solo album Cattle in the Cane includes his own renditions of traditional tunes (mostly old-time mountain music). In the last two years, Wilkes has continued to develop his solo project, having toured with Charlie Parr and The Tillers, as well as performing at the 2015 Winnipeg Folk Festival.

Wilkes is perhaps best known as the founder of the Legendary Shack Shakers, a Southern Gothic rock and blues band formed in the mid 90’s. He has been compared to iconoclasts like David Byrne, Iggy Pop, or Jerry Lee Lewis, and with his small, wiry frame and intense, incandescent performances, it’s not hard to see why. But while he plays the carnival barker onstage, he’s a dedicated lifelong student of true Southern culture. Master banjo player Dom Flemons said, “JD is a real old-Kentucky banjo player and he can take that to the bank!”