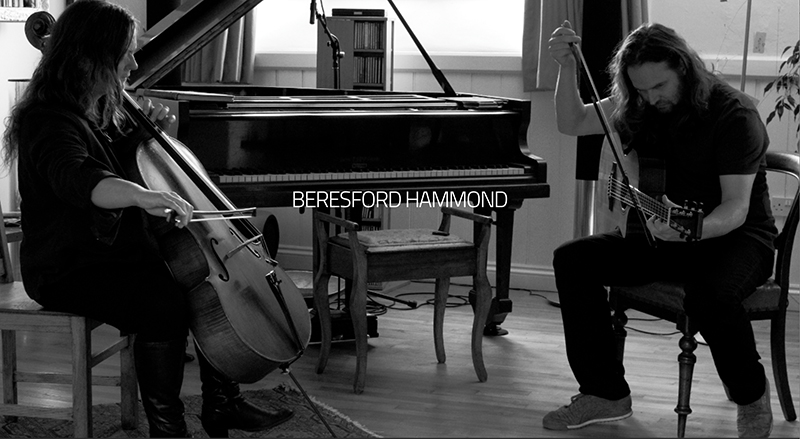 Welsh Marches based duo, Beresford & Hammond will be launching their new album ‘Each Edge of the Field’ at the Chapel.

Charlie Beresford (acoustic guitar/voice) – as a musician and recording engineer, Charlie has been involved with classical, folk and improv projects with artists such as Russian free jazz prodigy Alexy Kruglov, Britfolk legend June Tabor, poet Ian McMillan and Judie Tzuke among others. As well as working as a solo artist with four albums to his name, he is a member of Fourth Page and works with cellist Sonia Hammond in a duo and trio format (with the addition of Carolyn Hume of Fourth Page). In his other life as a visual artist he founded ‘The 52nd’ project with Quebec based art photographer/filmaker Gaëna Da Sylva.

Sonia Hammond (cello) – was classically trained at Birmingham school of Music and the Royal College of Music, London and has since forged an eclectic freelance career. She has recorded with Chloe Goodchild, Barb Jungr, Babysnakes and Ennui and played in venues ranging from the rooftops of Timbuktu to the Camphill Communities of UK and Europe. Sonia is currently principal ‘cellist in the Brecknock Sinfonia and plays regularly with Castalia String Quartet and the Radnor Improvisers . Her first solo Bach CD was recorded live by Charlie Beresford at St Mary’s Church, Hay-on –Wye on 28th March 2014.

Beresford and Hammond met whilst working with the Radnor Improvisers, an improvising group which they are founding members of. Their first album ‘The Science of Snow’ was born when the two found themselves at a loose end due to a cancelled studio session and used the opportunity to record some duo improvisations together just to see where it would go. From this the duo decided to release the recording through Charlie and Gaëna Da Sylva’s art project ‘The 52nd’ and a small cottage industry label began which sent out copies far and wide with no expectation. Happily ‘The Science of Snow’ received critical acclaim in both the UK and mainland Europe and World wide radio airplay from the US to Germany. That year culminated in the duo performing in Hungary and Austria as well as the the UK. In 2016 they teamed up with pianist Carolyn Hume to form the Beresford Hammond Hume trio and released the also much lauded album ‘The Lightning Bell’ through ‘The 52nd’.This CD contains performances by the singer Judie Tzuke who joined them on a couple of their laid back recording sessions. So they are now following all this with a new duo recording ‘Each Edge of the Field’. This nine track CD, recorded in the same free spirited attitude as the first, sees them ‘hone their craft as they carve out an increasingly distinctive niche in the world of improvised music’  Jazz Mann