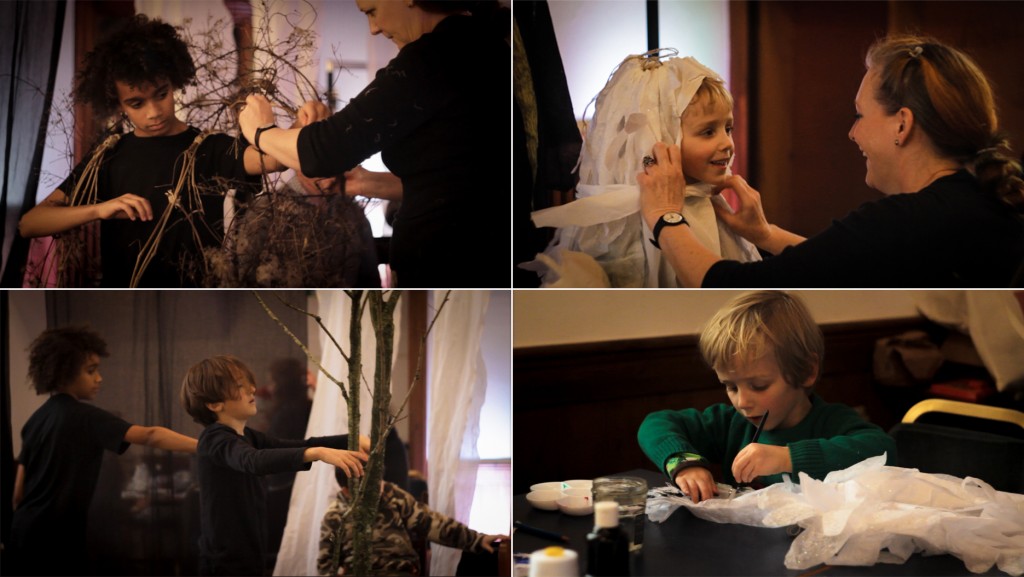 This exhibition follows a series of creative workshops for children, held every Saturday afternoon, between 14th November and 19th December, which culminated in a performance on the Winter Solstice, 22nd December 2015.

During a period of only six sessions, up to twelve children came together to explore the themes of a wild winter and the solstice. The workshops involved three artists with different disciplines: Clare Parry-Jones – costumes; Denni Dennis – movement; Leona Jones – sound. The children were therefore able to explore and focus upon their characters and the story that emerged, through visual, physical and auditory paths, engaging them in a deeply creative process.

Each artist facilitated the ideas that sprang from the imagination of each child. The artwork presented is a combination of their initial explorations and ideas for each character, their mask/face markings and costume. Clare made and painted each costume, based upon the drawings and ideas of each child, together with her own inspirations and the practicalities of the materials used: paper, muslin, leaves and plants. Denni created the choreography based upon each child’s unique movements and characterisation, bringing the story to life physically. The soundtrack ran throughout the performance and is primarily formed from the children’s voices, through stories and improvisations, woven together with additional material by Leona.