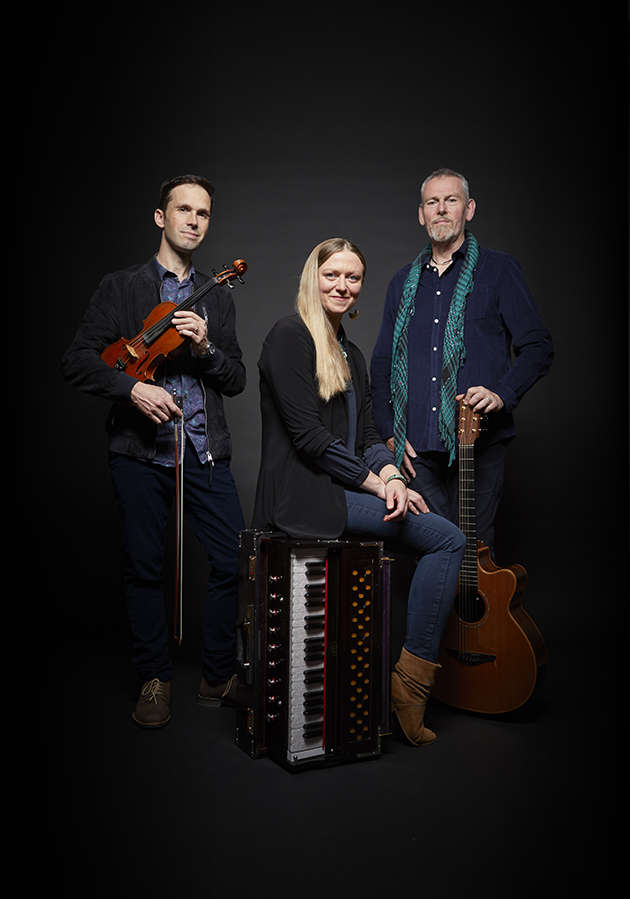 ALAW has recorded a new album for launch in February 2022. It will be their 3rd studio album and follows on from Dead Man’s Dance which received multiple award nominations, including BBC Folk Awards, and took a prize for ‘Best Instrumental Track’ at the Welsh Folk Awards.

Described by Songlines magazine as a “Welsh supergroup”, ALAW is three leading musicians who bring a wealth of experience to a shared passion – the traditional music of Wales. Nia Lynn’s exceptional voice dances with the dazzling fiddle of Oli Wilson-Dickson, interwoven with Dylan Fowler’s sparkling guitar playing. In August 2018 they collaborated with the BBC Concert Orchestra and others for a televised Prom at The Royal Albert Hall. ALAW’s performance was described on BBC Radio 2 as “Show-Stopping” and in the Times as “a sparkling collision of Celtic traditions”. In 2019 they won a Wales Folk Award after be nominated in 3 categories.

Oli and Dylan have a long history of working together, sharing projects including The Devil’s Violin and The Ian McMillan Orchestra. Oli is well known as the fiddler in Jamie Smith’s MABON. Nia has an international reputation and has sung at the Barbican and The Albert Hall. From stirring songs to driving jigs – they communicate their music with relaxed humour and a genuine affection that is truly infectious.

OLIVER WILSON-DICKSON is described by R2 magazine as ‘an expressive and exceptional fiddler’ he regularly collaborates with storyteller Daniel Morden, with whom he appeared for four consecutive years at the National Theatre. As a session musician, Oliver has contributed to recordings from Cartoons for the BBC and a BAFTA award winning film soundtrack to CDs for Warner International. As a composer he has written for stage productions and BBC Radio 4 drama. He plays in the house band on the Welsh TV show Noson Lawen.

DYLAN FOWLER’s musical palette draws on his experiences in contemporary European jazz, traditional music from the Celtic diaspora – particularly his Welsh heritage and his extensive experience as a collaborator with musicians from countries including India, Bulgaria, Serbia, Bosnia, Finland, Norway, Canada, Germany and Italy. As well playing in many groups he has a developed a reputation as an international solo guitarist, releasing albums on the German label, Acoustic Music Records. ‘This is music with heart, soul and, above all a bullish determination to ignore recognised boundaries.’ Chris Jones – BBC online reviews.

NIA LYNN is a vocalist, folk and jazz specialist, songwriter, multi- instrumentalist, voice and text coach for theatre and Film, as well as having an international career as an educator. She has been part of the UK music scene for over eighteen years, performing in many different bands and at such venues as Ronnie Scotts, Kings Place, Dean Street Jazz Club, to name but a few. She has performed as a soloist with the Rambert Dance company’s Olivier nominated production of ‘GOAT’ featuring the Music of Nina Simone, as well as performing at such concert halls as the Royal Festival Hall, The Barbican, and The Royal Albert Hall. She is also a Vocalist and Tabwrdd Player for the Seminal South-Walian Folk Band Yr Hwntws.