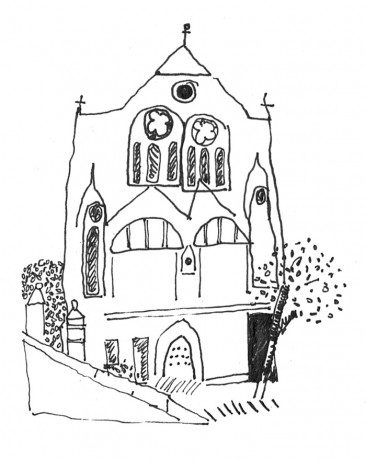 The Chapel is nearly open, the garden has one more planting to go and the kitchen is being installed next week…

Although we will not have officially opened, we didn’t want to miss this rare opportunity of hearing two great musicians in concert, so we are holding this event in the main chapel space. Come and join us for an inspiring evening, our first musical event at The Chapel.

‘…a well thought out exciting programme of fairly little known music that covers a broad spectrum of styles and musical periods. Surely it makes for a not to miss concert!’ (Cellist, Sion Dawson)

Spanish classical guitarist Agustin Maruri and British cellist Michael Kevin Jones will play in a special concert to be held at the Chapel.

The Jones Maruri duo is the only established cello guitar duo in the world. Formed in Madrid in 1990, they have since played in concerts at venues such as the Lincoln Centre, Metropolitan Museum of Art and the Hancock Centre.

Agustin Maruri has received scholarships and awards towards his work as a musicologist, discovering many lost or forgotten works in the Biblioteca Nacional de Madrid, the Munich Library and the British Museum. In 1999 he started a collaboration with the Metropolitan Museum of Art in New York and the first of a series of recordings was ‘The Charm of Spain’; a collection of Spanish romantic melodies from the 19th century performing on instruments from the museum’s exclusive collection.

Cellist Michael Jones studied at Dartington College before going on to the Royal College of Music. Whilst in London he won prizes for solo and chamber music playing and was awarded a scholarship from the German Government to study cello under the great teacher Johannes Goritzki. In 2002 he recorded the complete Bach Suites for Solo Cello on a 1667 Stradivarius Violoncello for the Metropolitan Museum of Art in New York.