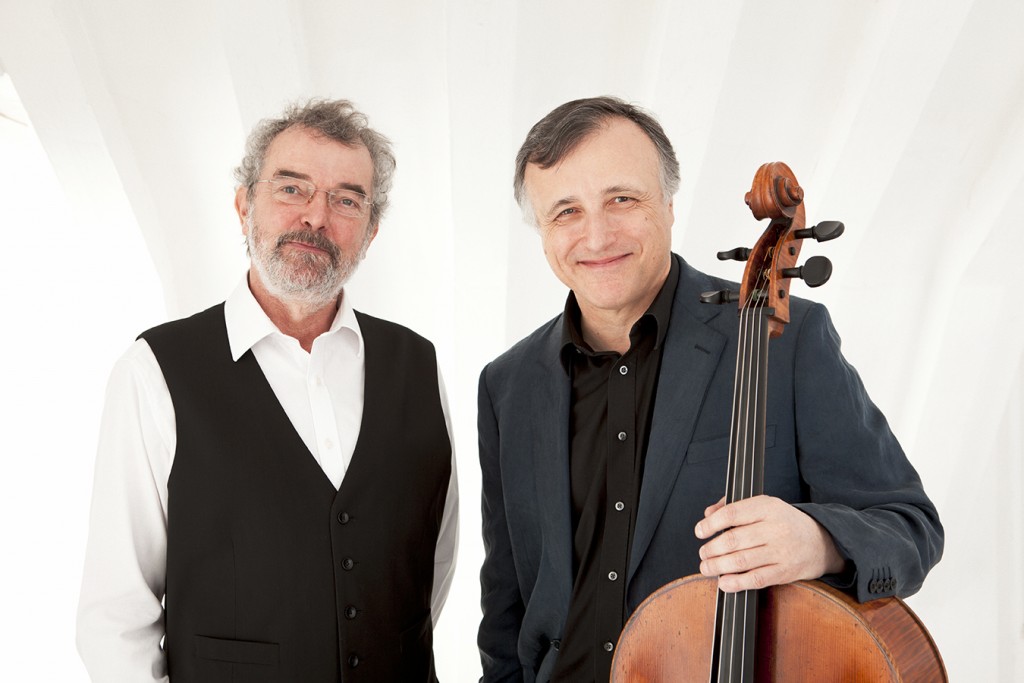 Abergavenny Chamber Music began their chamber music concerts at the Chapel with a Bach cello concert by Raphael Wallfisch. We are delighted to open the second season with another appearance by this internationally renowned cellist, this time joined by his very long time collaborator, pianist John York. They have a wide repertoire, from premieres of contemporary work to 19th century obscurities.

60 years separate Brahms’ sonata from the Beethoven variations, and there is a similar gap between the Brahms and the Martinů. It is extraordinary that Beethoven not only invented the cello sonata but also, over just two decades, perfected it, leaving five masterpieces in the genre! But, in order to do that, he also needed to explore the new-fangled combination of instruments, to try things out – and that’s where the variation sets came in. Well-loved melodies, ‘hits’ of the time, are borrowed from Handel and Mozart. (British audiences know the Handel theme as ‘Thine is the glory.’) Following Beethoven’s example, many 19th century and 20th century composers contributed cello sonatas and Brahms’ Op. 99 represents the very finest achievement in the genre in its day – 1886. A brilliantly judged balance of technical challenges, compositional cleverness, melodic richness and sheer entertainment value ensure its everlasting popularity. Martinů’s music, however, might be less familiar to the audience tonight – but have no fear! A virtuoso display, motoric repetition and loads of rollicking panache that he sums up at the brilliant finish.  (John York)

Raphael Wallfisch is one of the most celebrated cellists performing on the international stage. At the age of 24 he won the Gaspar Cassadó International Cello Competition in Florence. Since then he has enjoyed a world-wide career playing with such orchestras as the London Symphony, London Philharmonic, Philharmonia, BBC Symphony, English Chamber Orchestra, Hallé, City of Birmingham Symphony, Leipzig Gewandhaus, Berlin Symphony, Westdeutscher Rundfunk, Los Angeles Philharmonic, Indianapolis Symphony, Warsaw Philharmonic, Czech Philharmonic and many others. He is regularly invited to play at major festivals such as the BBC Proms, Edinburgh, Aldeburgh, Spoleto, Prades, Oslo and Schleswig Holstein. He is in demand as a teacher all over the world and holds the position of professor of cello in Switzerland at the Zürich Hochschule der Kunst.

John York‘s 40 year career has taken him around the world, working with some of the finest orchestras, soloists and chamber groups. The majority of his work has always been with Raphael Wallfisch and York2 piano duo. Before his duos became established 30 years ago, he had already won the International Debussy Prize in Paris, played concertos with such orchestras as the London Mozart Players and the London Philharmonic, founded the successful York Piano Trio and Piano Quartet and partnered a list of illustrious performers in many countries. He was professor at the Guildhall for 33 years, and Senior Music Head at St Paul’s Girls’ School, London for 20 years.